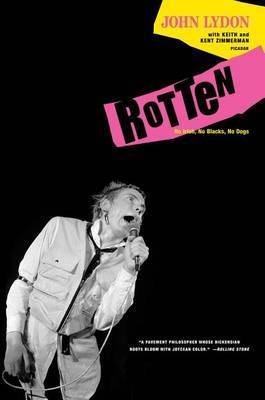 Rotten - No Irish, No Blacks, No Dogs

"I have no time for lies and fantasy, and neither should you. Enjoy or die..." --John Lydon

Punk has been romanticized and embalmed in various media. An English class revolt that became a worldwide fashion statement, punk's idols were the Sex Pistols, and its sneering hero was Johnny Rotten.

Seventeen years later, John Lydon looks back at himself, the Sex Pistols, and the "no future" disaffection of the time. Much more than just a music book,Rottenis an oral history of punk: angry, witty, honest, poignant, crackling with energy. Malcolm McLaren, Sid Vicious, Chrissie Hynde, Billy Idol, London and England in the late 1970s, the Pistols' creation and collapse...all are here, in perhaps the best book ever written about music and youth culture, by one of its most notorious figures.

John Lydon still performs and tours with the Sex Pistols. He also records and performs both as a solo artist and with PiL (Public Image Limited). He lives in California.